Running Over Scoliosis: A Back Brace Isn't Slowing Effie Down

After undergoing brain surgery, Effie was diagnosed with scoliosis and prescribed to wear a back brace for 20-plus hours a day, but she hasn’t let it stop her from her love of running.

After undergoing brain surgery, Effie was diagnosed with scoliosis and prescribed to wear a back brace for 20-plus hours a day, but she hasn’t let it stop her from her love of running.

What started as a routine annual well-check appointment in October 2017 for Effie Ward, ended up with her receiving a scoliosis diagnosis and eventually undergoing brain surgery.

“Unfortunately, Effie is always the one who gets the short stick,” explained her mother, Julie Ward. “She has had anxiety issues in the past, had eye surgery when she was just 4 years old and now has to wear glasses, she seems to have to work harder than my boys in school, and now this. She’s just always had these obstacles to jump over.”

After Effie’s pediatrician discovered she had scoliosis, she was ordered to have an X-ray, where radiologists learned that she had a double curve in her spine. Julie contacted Children’s Physician Group–Orthopedics and Sports Medicine to figure out the next step. That’s when the family met with Joshua S. Murphy, MD, a Pediatric Orthopedic and Spine Surgeon at Children’s.

“I advised Effie and her family that she’d need a brace to help improve the curvature in her spine,” Dr. Murphy said. “I also ordered an MRI, because I noticed some abnormal abdominal reflexes during her check-up.”

Less than an hour after the MRI, Julie received a phone call from Children’s that her daughter had a Chiari malformation—a condition in which brain tissue extends into your spinal canal—and significant fluid on her spinal cord. Effie would need brain surgery in the next two weeks.

“She went from a well visit to scoliosis to brain surgery in just three weeks,” Julie said. “It was a hot mess of a whirlwind, but Effie has been such a trooper.”

Effie, now almost 12 years old, underwent brain surgery on Nov. 6, 2017, and doctors were able to repair the Chiari malformation and reduce the amount of fluid on her spine.

The most amazing part is that six weeks later, Effie was able to get back to something she loves—running with her mom. And in early 2019, she completed two half marathons. 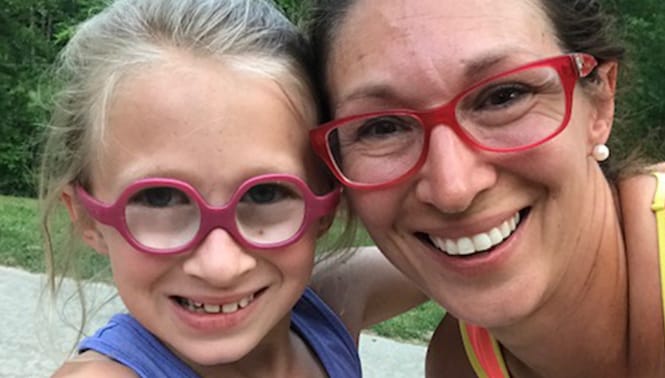 “I’m relaxed and in my own little world when I run,” said Effie, adding that she was super proud of herself for completing the half marathons earlier this year.

Effie must still wear a back brace approximately 22 hours a day to help improve the curvature in her spine, and she will continue to wear it until she’s about 14 years old, but it certainly hasn’t slowed her down. 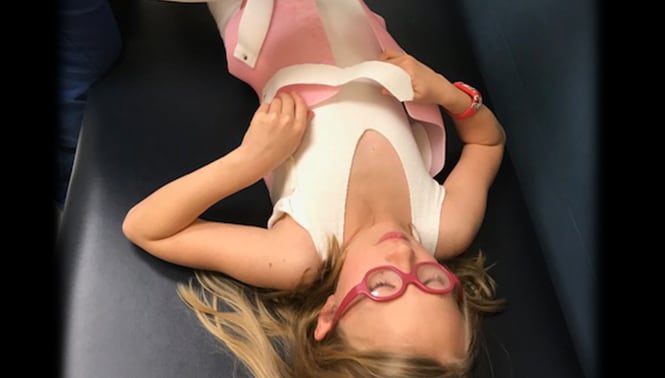 “Effie will be able to continue her running,” said Julie, “and she knows that wearing the brace is just a part of her life right now.”

“The goal of treatment using a brace is to decrease the progression of Effie’s curvature,” Dr. Murphy said. “Bracing is only used when a child is still growing and with kids who have moderate or progressive curves in their spines. It helps keep curves from getting worse.”

And while wearing a brace can be uncomfortable at first, it doesn’t keep children like Effie from activities they enjoyed before the diagnosis.

Effie is in sixth grade this year and is running with her middle school’s seventh- and eighth-grade cross-country team. 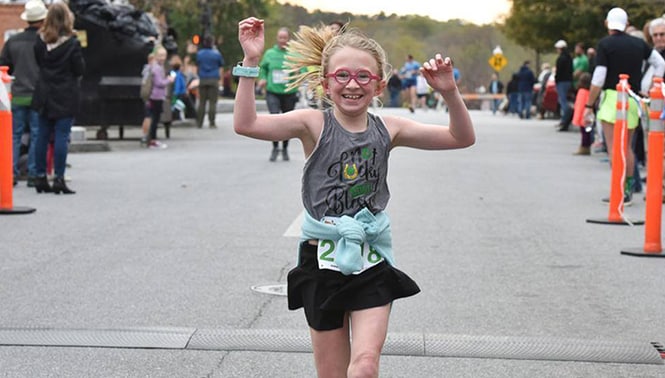 She is also interested in helping organize and be a spokesperson for a 5K or 10K race that would raise money in support of the Spine Program at Children’s. “She wants kids to know that scoliosis doesn’t mean you can’t be active,” said Julie.

Joshua Murphy, MD, is a Pediatric Orthopedic and Spine Surgeon at Children’s Healthcare of Atlanta. He is actively involved in orthopedic research with organizations like the Pediatric Spine Study Group and Children’s Orthopaedic and Trauma Infection Consortium for Evidence Based Study (CORTICES). Dr. Murphy also participates in or leads a variety of prospective and retrospective studies within Children’s, specifically about pediatric spine or pediatric trauma and infection.

Image courtesy of The Ledger-Enquirer