Angie Rush knew she had a 50-50 chance of passing along the gene for retinoblastoma to her children. What she didn’t know was that all three of her boys would be diagnosed with the same disease.

Parents hope to pass on traits like their smile, eye color and sense of humor to their children. What many families don’t expect to pass on to their kids is cancer.

Angie Rush still remembers getting the news that a genetic mutation she carries for retinoblastoma, a rare cancer that occurs in the retina of the eye, had been passed on to her three sons. “It was a shock, and it was a surprise; it was very emotional,” said Angie.

Angie was diagnosed with retinoblastoma when she was an infant. She lost her left eye at 6 weeks old and knew when she became pregnant, she had a 50-50 chance of passing the gene to her children. What she didn’t know was that all three of her boys would be diagnosed with the same type of cancer.

Staying one step ahead

Because retinoblastoma often has a genetic link, Angie made sure her sons received regular eye screenings from birth and were followed by the Cancer Predisposition Program at the Aflac Cancer and Blood Disorders Center of Children’s Healthcare of Atlanta. Children’s founded the Cancer Predisposition Program in 2017 to help treat children under the age of 18 who are at risk for cancer due to a cancer predisposition syndrome, family history of cancer or diagnosis of a rare type of cancer.

One-year-old Carter Rush, the youngest brother, received his diagnosis of bilateral retinoblastoma at 6 months old. It was news his parents hoped they’d never hear again. “On one hand, we knew what to expect, but that doesn’t make it any easier,” said Angie.

Their oldest son Tristen, now 6, was born prematurely. A tumor was discovered in both of his eyes when he was just 3 weeks old. Tristen was immediately transferred to the Neonatal Intensive Care Unit (NICU) at Children’s, where he underwent six months of chemotherapy and laser treatments to remove the tumors while preserving his vision. Two years after Tristen finished treatment, Caison was born four weeks premature.

“There is a 50% chance of passing along familial bilateral retinoblastoma,” said Thomas Olson, MD, a Pediatric Oncologist and Director of the Solid Tumor Program at the Aflac Cancer and Blood Disorders Center. “It is not common for all three children to be diagnosed, but it is possible.”

Over the past six years, Angie says Children’s has become a second home to their family. All three of the Rush boys are treated by specialists at the Aflac Cancer and Blood Disorders Center, which is one of the largest pediatric cancer centers in the country, treating more than 475 new cancer patients in 2019. Children’s was ranked No. 7 in the nation for pediatric cancer care by U.S. News & World Report in 2020, so the Rush family knew their sons were in capable hands, receiving the best treatment available.

Seeing promise for a bright future

Carter just finished chemotherapy treatment. His older brothers Tristen and Caison have not developed any new tumors since their first birthdays, but they still visit Dr. Olson at the Aflac Cancer and Blood Disorders Center for regular checkups and MRIs.

Although experiencing the same cancer diagnosis in all three of their sons has been challenging for the Rush family, Angie and her husband, Aaron, remain optimistic and believe their boys’ medical journeys have made them stronger. “Now Tristen wants to be a doctor when he grows up,” said Angie.

“I’ve always heard that these early years with kids fly by so fast, so I try to remind myself that one day I will miss this busy stage in life,” Angie added. “I always write down important events in the boys’ lives so that in the future we can all look back on the special moments we’ve shared." 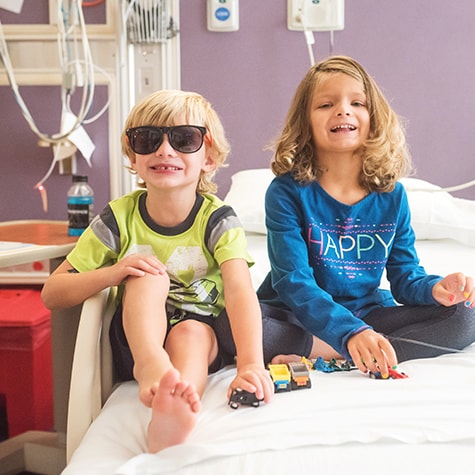 Looking Out for Cancer Predisposition Syndromes

When cancer runs in the family, parents often struggle with the unknown. That’s why we help them stay one step ahead of a child’s diagnosis with regular screening and open communication. 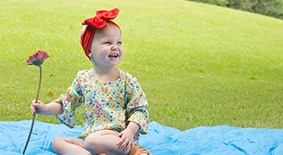 Cancer and an Amputation Didn’t Take Away Keren’s Joy 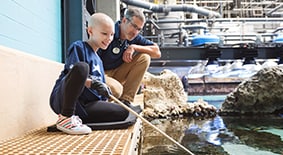