After learning that chemotherapy alone wouldn’t be enough to beat Alivia Linnekin’s acute myeloid leukemia (AML), Children’s Healthcare of Atlanta helped her find a blood and marrow donor so that she could start planning her next hairdo. 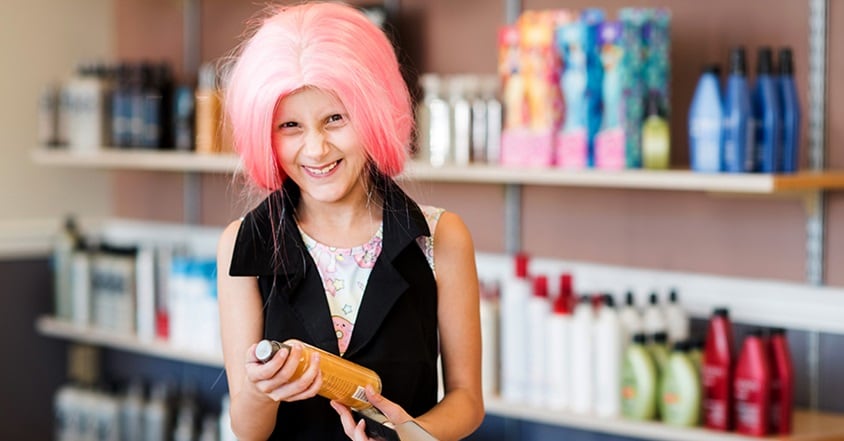 Learning that your daughter has leukemia is difficult enough. Imagine knowing you’ll also need to rely on a complete stranger to save her life.

When she was 7, Alivia kept contracting strep throat. Antibiotics weren’t helping. “We went back and forth to the hospital,” says Alivia’s mother, Denise, “so one day I just asked them if they would do a blood test. My intuition told me something else was wrong with her.”

The bloodwork showed that Alivia had acute myeloid leukemia (AML), a cancer of the blood and bone marrow. Immediately, she was transported to Children’s for further testing and was soon admitted to the Aflac Cancer and Blood Disorders Center of Children's.

After her first round of chemotherapy, a bone marrow biopsy revealed that chemo alone wouldn’t be enough.

Searching for a donor

Alivia would need a blood and marrow transplant (BMT), commonly referred to as a bone marrow transplant. But first, her care team would need to find a match. Children’s enlisted the aid of Be the Match, the world’s largest and most diverse bone marrow registry in the world. They were able to find an anonymous donor with the same blood and marrow type.

“It’s unbelievably emotional to know that someone else is willing to donate their bone marrow for our kid. I can’t wait to meet this person,” Denise says. “This has motivated her dad and I to become bone marrow transplant donors as well.”

After her fourth round of chemo, Alivia underwent her BMT. Having one of the country’s largest BMT programs, the Aflac Cancer and Blood Disorders Center performs more than 80 of these procedures a year.

“It’s a lot watching your kid go through this, but when you meet the doctors, nurses, surgeons, child life specialists and volunteers, and they all have smiles on their faces, it’s just wonderful,” Denise says. “You can tell they actually love what they do, and these are the people who help you get through it and become like family.”

Colorful plans for the future

After her BMT, Alivia would remain in the hospital for 100 more days, stuck inside and kept from playing with her best friends—including her big sister Carly.

But once her treatment is completed, Alivia looks forward to returning home, growing her hair out, and dying it pink. Denise, a veteran hairstylist, has passed along her love of haircare to her daughter. “Her favorite thing to do is shampoo hair, blow dry it and flat iron it,” Denise says. “She’s been trying to learn how to make curls.” 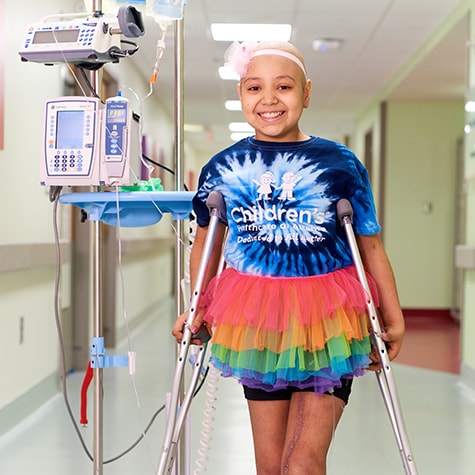 Setting the Standard for Care

For 25 years, the Aflac Cancer and Blood Disorders Center of Children’s Healthcare of Atlanta has been one of the leading childhood cancer programs in the country, both providing leading care and researching possible cures. 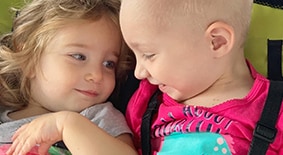 Is Her Sibling Also at Risk for Cancer? 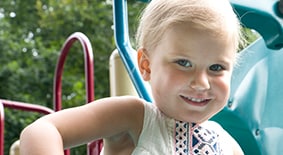 For Two Years, Raelyn Was All-In to Beat All 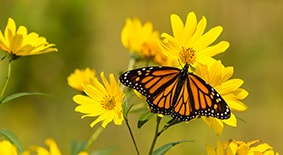