How to Safely Clean Your Child's Ears

A moderate amount of earwax is healthy, so most of the time, ear cleaning is not needed. But if your child experiences wax buildup in the ear canal, it is important you know how to safely clean his ears.

Everyone has earwax, but some people notice it in their ears—or in their children’s ears—more than others.

"It seems like there are a lot of misconceptions about earwax,” says Nandini Govil, MD, MPH, a Pediatric Otolaryngologist at Children’s Healthcare of Atlanta, “but it is totally normal and not anything dangerous.”

Earwax acts as a lubricant for the ear. It is made by the sebaceous glands in the hair follicles in the ear canal. The lubrication properties in earwax help decrease the chances of irritation and infection in your child’s ears.

How do I know if there’s earwax buildup in my child’s ear?

Most of the time, children will complain that they feel like something is in their ears, or a parent can sometimes see the earwax buildup.

What if there’s too much earwax buildup?

If your child does have buildup in his ear and you’re not able to safely remove the earwax, we recommend scheduling an appointment with your pediatrician.

A moderate amount of earwax in a kid’s ear is healthy, so most of the time, ear cleaning is not needed. If your child experiences wax buildup in the ear canal, it is important you know how to clean his ears safely.

How do I clean out my child’s ears safely?

“Using an eye dropper you can get at the pharmacy, put a couple of drops in the ears once a day for about a week,” Dr. Govil explains. “It helps soften the earwax; however, it doesn’t get rid of the earwax.”

Then give your child a bath or shower. Steam from the shower or bath helps loosen the earwax. Afterward, wipe the outside of the ear with a soft washcloth to remove any excess earwax.

Similarly, if your child has water in their ears after a bath or swimming at the beach, pool or lake, Dr. Govil recommends using a soft washcloth to clean the outer part of the ear. Using a hair dryer on the lowest and coolest settings, and holding it about 10 inches away from your child’s ear, blow away the moisture to help dry out his ears.

Are cotton swabs safe for my child’s ears?

Dr. Govil doesn’t recommend using Q-tips in your child’s ears, but if you do, make sure you can still see the white cotton part of the swab when you put it into his ear canal. This can help prevent the Q-tip from going in too far.

Can you damage the ear if you use a cotton swab too often or incorrectly?

Cleaning your child’s ears too much can cause the ears to be dry. This may lead to other issues, such as flakiness or itching. Earwax helps keep the ear lubricated and moisturized.

“Cleaning the ears using Q-tips can also increase a child’s chance of an outer ear infection,” Dr. Govil adds. “If the outer ear is dry, it is more prone to getting cuts, which can lead to an infection.”

If you put the cotton swab too far in your child’s ear, there’s an increased risk of injuring the eardrum or hearing bone, which sits right behind the eardrum.

Sometimes, earwax becomes impacted, which means it’s completely blocking the ear canal and may be affecting your child’s hearing. This can happen when the body creates too much earwax, or because use of a Q-tip has compressed the earwax inside the ear canal. If earwax is impacted, it may need to be removed by a doctor.

It’s important to listen to your instincts. If you think your child isn’t hearing well, or they are complaining about their ear feeling full, contact your child’s doctor. 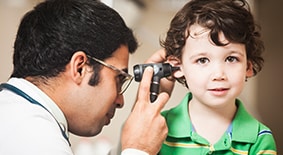 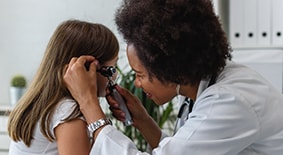 What to Expect During Ear Tube Surgery 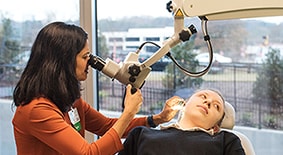 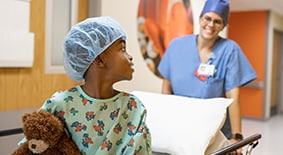 Does My Kid Need a Tonsillectomy? 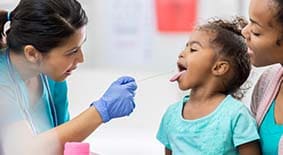 How Do I Know if My Child Has Strep Throat? 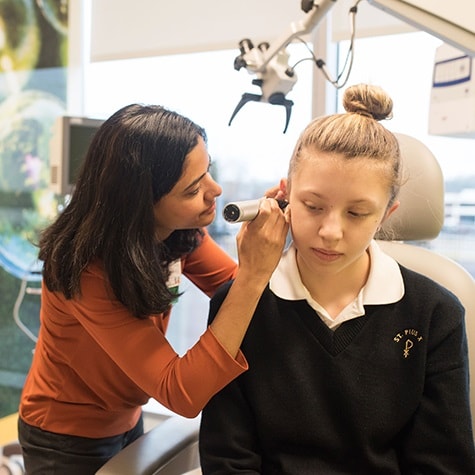 If your child has ear infections, strep throat or other issues that impact their ears, nose or throat, find a pediatric otolaryngologist or click the link below to schedule an appointment.