Arthrogryposis Is No Match for Bash

In spite of the physical limitations of a rare congenital disorder, Bash is breaking barriers and gaining independence thanks to the right treatments and lots of support.

Whether it’s a wiggle of the fingers or riding a bike, for 11-year-old Bash Hagelin, there is no milestone too minor to celebrate, and none too big to accomplish. He is always up for the next challenge.

Born with stiff, weak muscles and rigid joints in the elbows, wrists, shoulders, knees, hips and ankles, Bash’s challenges include tasks that come easily and naturally to most kids. The side effects of a rare congenital disorder called arthrogryposis multiplex congenita (AMC) have limited his ability to sit, crawl, walk and play.

Yet, Bash’s case is considered mild for AMC. And his parents, Nick and Christina, are driven by the hope that he can fully recover.

The team at Children’s Healthcare of Atlanta has played a key part in what the Hagelin family calls Bash’s “journey to bendiness.” The goal: improved strength, flexibility, mobility and, ultimately, independence. Bash had his first physical therapy session at Children’s when he was just 9 days old, a routine that would continue 5 days a week for the first 3 years of his life. This introduction to Children’s was an awakening for Nick and Christina.

“We got a dose of perspective seeing what other families are dealing with,” says Christina. “Seeing the great quality of life play out for so many kids with so many different conditions gave us hope that Bash would be OK.”

Progress, however, did not come easily for Bash. It took lots of time and hard work. In addition to continuous therapy, he required multiple surgeries. Bash’s arms were limp and lifeless because his biceps never developed. His wrists and hands had limited range of motion. Orthopedic hand surgeon Allan Peljovich, MD, performed three upper body procedures to help give Bash use of his arms and hands. Beyond his skill and expertise as a surgeon, Dr. Peljovich offered the family encouragement.

“Dr. Peljovich told us that Bash can do whatever he wants to do and will figure it out in his own way,” says Nick.

And figure it out, he did. Bash surpassed all expectations physically. But it was his silly, spunky, smile-through-it-all approach to every obstacle that set him apart. He encouraged others to join him on his mission to stay positive and keep pushing for progress.

Through social media and even a brief appearance on “The Voice” alongside his dad, a professional musician, Bash has spread the word about his condition far and wide. And the family has gotten support from Bash fans nationwide. His biggest fans, of course, are right here at Children’s.

The next big milestones for Bash: future surgeries for his arms and legs, including one innovative procedure to build a bicep. Plus, he’ll continue exploring new ways to improve his mobility, such as robotic devices and alternative therapies. The Hagelin family is confident that, with the right tools and with Bash’s determined spirit, he’ll continue to get closer to his goal of being “bendy” enough and strong enough to be independent.

We Can’t Do It without You

Help us stay one step ahead of the growing demand for specialized pediatric care. 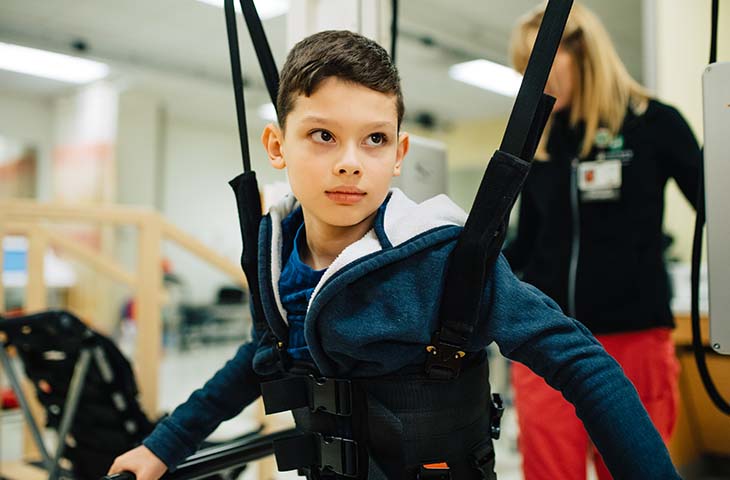 From robotics to advanced orthotics, Children’s has the resources to get kids moving again.