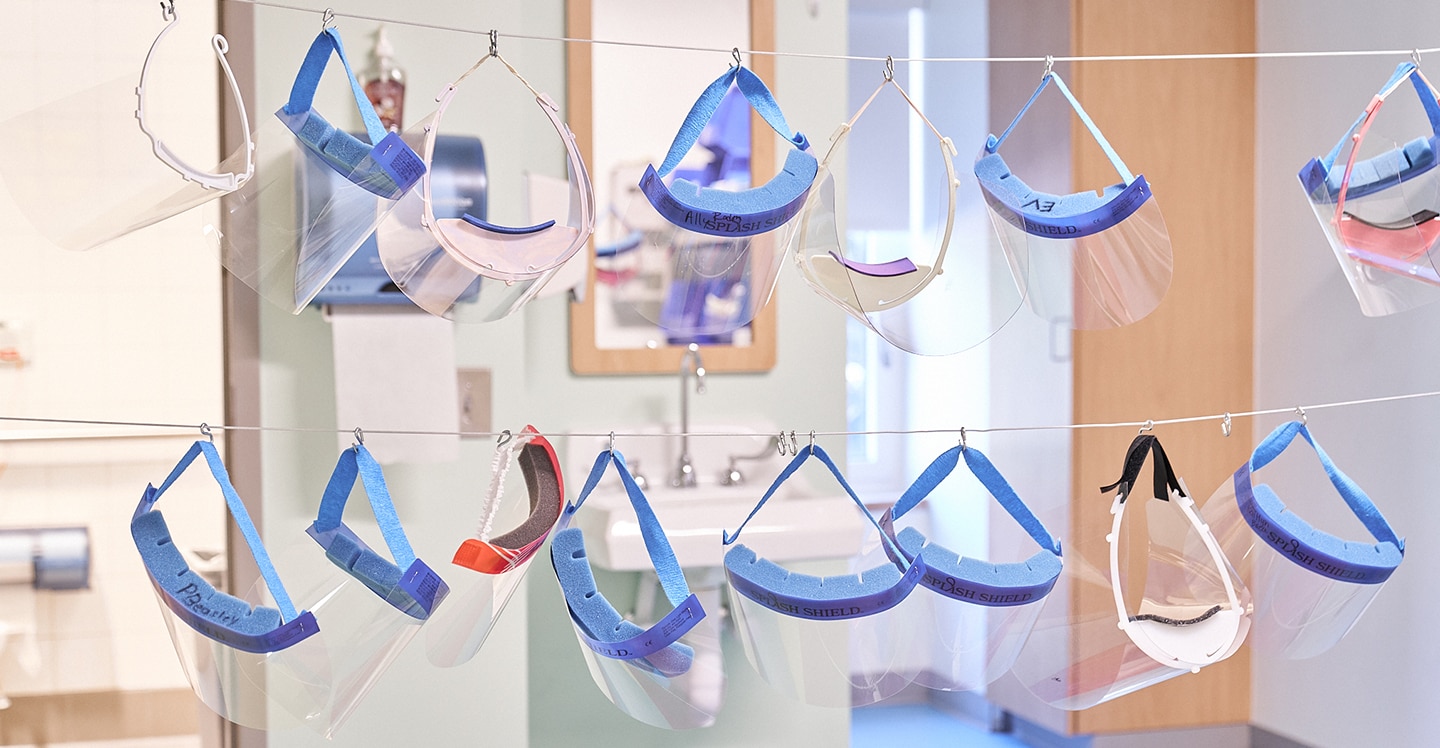 Children’s and its academic partners have been selected to help fast-track diagnostic testing, participate in a vaccine trial and engage in many other vital COVID-19 research projects.

Researchers at Children’s Healthcare of Atlanta are working hard every day to find new treatments for COVID-19. The emergence of this new virus changed the world, as so little was initially known about the infectious disease. We’re proud to be on the front lines of the fight against COVID-19, working with our partners in local research institutions and receiving grants from the federal government so we can soon put an end to the pandemic. 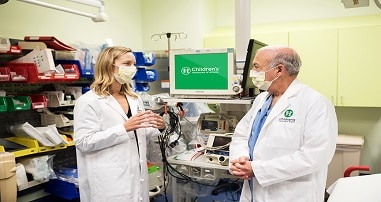 Increased levels of plasma osteopontin were observed in patients with COVID-19 and multi-system inflammatory condition in children (MIS-C). 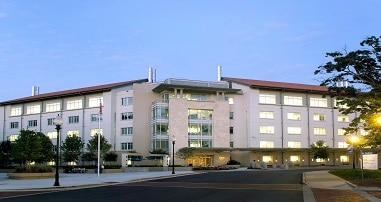 The trial will test the Moderna COVID-19 vaccine in children ages 6 months to less than 12 years. 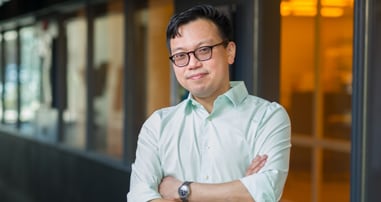 Children’s, with its partners Emory University and Georgia Tech, has been awarded a total of $54 million from NIH to evaluate COVID-19 diagnostic testing. 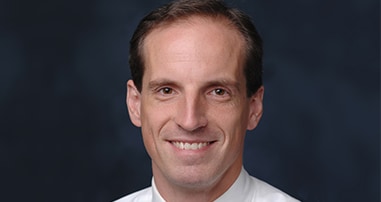 Urging the Start of COVID-19 Vaccine Trials in Kids 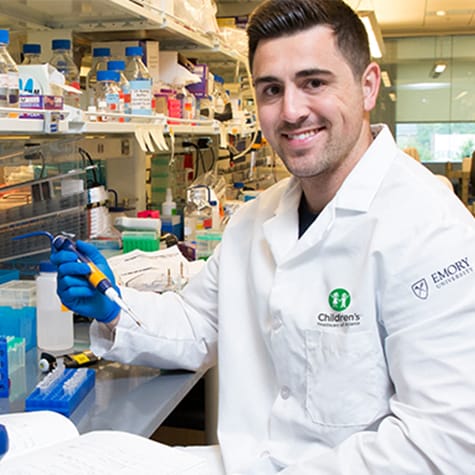 Learn how we’re breaking barriers and fighting for the future

Our researchers met challenges presented by COVID-19 head on in 2020, culminating in a No. 1 ranking for National Institutes of Health (NIH) funding among pediatric departments and many other notable achievements. The 2020 Research Report honors our great strides forward in breaking barriers and fighting for the future.

Children’s, the Emory University School of Medicine Department of Pediatrics and the Georgia Institute of Technology have received a total of $54 million from the National Institutes of Health (NIH) for the Rapid Acceleration of Diagnostics (RADx) program. This includes an initial $31 million supplement awarded in May 2020—one of the largest grants awarded to any participant in the RADx program. RADx is a federal initiative designed to rapidly transform early, innovative technologies into widely accessible COVID-19 diagnostic testing.

In April 2020, Children’s, Emory University and Georgia Tech were selected to lead the national effort in testing validation and verification through the Atlanta Center for Microsystems Engineered Point-of-Care Technologies (ACME POCT). The center has since participated in verifying more than 40 tests for NIH, including an at-home test that received emergency use authorization from the U.S. Food and Drug Administration (FDA).

“The $31 million award was the largest NIH grant ever to be received by Children’s or Emory University in a single budget cycle,” says Lucky Jain, MD, MBA, Chief Academic Officer at Children’s and Chair of the Emory University Department of Pediatrics. “With a total of $54 million, the team will continue their exciting and fast work, helping the country’s safe return to work and school. We are thrilled to see them on the front line, leading the way in such a historic initiative.”

As one of only five NIH-funded, point-of-care technology centers in the nation within the Point-of-Care Technologies Research Network, ACME POCT leads testing verification and works closely with partners across the country—including relevant technology developers and others in the medical diagnostics industry—to make millions of accurate and easy-to-use tests available.

“We are vetting thousands of COVID-19 diagnostic tests the NIH receives from across the country to a smaller group of meritorious projects, which our center shepherds toward manufacturing and scale-up for use at home or in the clinic,” says Wilbur Lam, MD, PhD, a Pediatric Hematologist/Oncologist at the Aflac Cancer and Blood Disorders Center of Children’s and Principal Investigator of ACME POCT.

The National Institute of Biomedical Imaging and Bioengineering (NIBIB) in April 2020 urged scientists and inventors with a rapid testing technology to compete in the national COVID-19 testing challenge to support overall phases of development to assist the public’s safe return to normal activities. The technologies were put through a highly competitive, rapid three-phase selection process to identify the best candidates for at-home or other point-of-care use.

ACME POCT fosters the development and commercialization of microsystems (microchip-enabled, biosensor-based, microfluidic) diagnostic tests that can be used outside the traditional hospital setting, in places such as the home, community or doctor’s office.

The project has multiple principal investigators, including Dr. Lam, who is also an Associate Professor at Emory University and the Wallace H. Coulter Department of Biomedical Engineering at Georgia Tech; Greg Martin, MD, MSc, Professor at Emory University and Chair of Critical Care for Grady Health System; and Oliver Brand, PhD, Professor at the Georgia Tech College of Engineering School of Electrical and Computer Engineering and Executive Director for the Institute for Electronics and Nanotechnology. Together, the team makes up one of the primary point-of-care centers in the nation dedicated to developing microsystems with sensors, smartphones and wearable technologies.

Lucky Jain, MD, MBA, became the Chief Academic Officer at Children’s Healthcare of Atlanta in 2017. He also serves as the George W. Brumley Jr. Professor, Chair of the Department of Pediatrics at Emory University School of Medicine.

Wilbur Lam, MD, PhD, is a Pediatric Hematologist/Oncologist at the Aflac Cancer and Blood Disorders Center of Children’s Healthcare of Atlanta, as well as an Associate Professor at Emory University School of Medicine and Georgia Institute of Technology. He is also Principal Investigator at ACME POCT.

The Moderna COVID-19 vaccine for the prevention of COVID-19 tested at the Emory Children’s Center Building has received emergency use authorization from the FDA, allowing the vaccine to be distributed in the U.S. for use in individuals 18 years of age and older.

The vaccine, mRNA-1273, was co-developed by researchers at the National Institute of Allergy and Infectious Diseases (NIAID) and biotech company Moderna Inc. in Cambridge, Mass.

Emory University enrolled about 700 people as part of a Phase 3 trial, also known as the COVE Study.

The mRNA-1273 vaccine was tested in the Vaccine Clinic at the Emory Children’s Center Building under the direction of Principal Investigator Evan Anderson, MD, Pediatric Infectious Diseases Physician at Children’s.

“We’re excited to be part of this vaccine to combat COVID-19,” says Dr. Anderson, who is also an Associate Professor of Medicine and Pediatrics at Emory University.

In an analysis released in early November 2020 by Moderna, 95 participants contracted COVID-19. Ninety of those cases were in a placebo group and five in the group that received mRNA-1273. Eleven of the COVID-19 infections were categorized as severe, and all of them were in the placebo group.

Emory University was the second site in the nation to enroll volunteers in the initial Phase 1 study of the vaccine, which established the dose and looked at whether the vaccine was safe. Researchers said the results showed the vaccine was generally well tolerated and stimulated a robust immune response.

In late October 2020, Emory University began enrolling participants in a large trial of another vaccine candidate developed by the Janssen Pharmaceutical Companies of Johnson & Johnson. It is the first Phase 3 clinical trial to assess whether a single-dose vaccine can protect people from COVID-19. Dr. Anderson is Principal Investigator for the trial at Emory University.

The COVE Study was conducted by the Emory University Vaccine and Treatment Evaluation Unit (VTEU), which is part of NIAID’s Infectious Diseases Clinical Research Consortium and the COVID-19 Prevention Network supporting this trial. Emory University has been a VTEU site since 2007.

Additional information about the trial design is available at clinicaltrials.gov using the identifier NCT04470427.

The Emory University VTEU is supported by the NIAID (UM1AI148576).

Evan Anderson, MD, is a Pediatric Infectious Diseases Physician at Children’s Healthcare of Atlanta and Associate Professor of Medicine and Pediatrics at Emory University School of Medicine.

Get the Latest News

Receive our latest research and innovation updates straight to your inbox.

Research into COVID-19 is ongoing, with new discoveries coming at an unprecedented pace. To stay on top of research advancements at Children’s, sign up for our updates.