A Little Spunk Goes a Long Way: Liver Cancer Was No Match for Aubrey

Aubrey English was just 2 years old when she was diagnosed with hepatoblastoma, a rare liver cancer. Thanks to her stubborn determination and top-notch cancer care, Aubrey is now in remission.

Call it a stubborn streak, spunkiness or sass. Whatever you call it, it made all the difference for 4-year-old Aubrey.

The youngest of four kids, Aubrey was born dangerously premature at just under 2 pounds. She beat the odds and grew into a happy, healthy toddler. But at age 2, her health again took a turn. This time, it was cancer.

“We took her into the doctor thinking maybe she had a urinary infection,” says her mom, Mikeon. “She’d been using the bathroom frequently and bed wetting, which was abnormal for her.”

Aubrey’s pediatrician discovered a mass on her liver, and she was referred to the Aflac Cancer and Blood Disorders Center of Children’s Healthcare of Atlanta. Soon, tests revealed that she had hepatoblastoma, a rare childhood liver cancer.

“As a nurse, knowing what I know about cancer, it was very scary for me. My husband and I were in shock,” says Mikeon.

Aubrey had a complex, eight-hour surgery to remove the tumor, as well as 50% of the liver and her gallbladder. “After surgery, she ended up needing six rounds of fairly intensive chemotherapy,” says Kathryn Sutton, MD, a Pediatric Oncologist at Children's.

“Surgery was definitely scary, but listening to the chemo talk was probably the worst,” says Mikeon. “Just hearing the side effects was very intense. But Dr. Sutton sat down with us to go through every medication that Aubrey was getting and explained everything, from the simple side effects to what Aubrey may face into adulthood. I felt very comfortable with her and that I could ask her anything.”

Chemotherapy lasted much longer than the expected 18 weeks due to multiple complications. “Every round was worse and worse on her body,” says Mikeon. Aubrey lost her hair. She was weak and struggled to eat. But still, Aubrey maintained that “fire in her eye,” says Mikeon. And that fire was contagious. “She was so tired and weak, but she still wanted to color or put on her princess costume and run through the house. There was always a little bit of her in there that kept us going and pushed us to do and to go every single day.”

When stubborn is a virtue

Today, Aubrey is flourishing. Her cancer is in remission. She’s in pre-K and is right on target with the other kids. She’s back to dancing to her favorite “Moana” soundtrack, drawing, painting and bossing around her older siblings.

“She’s been fighting since the day she came into this world,” says Mikeon. “She wasn’t supposed to be here initially, and to fight through cancer the way she did and to keep us going the way she did, it’s all a miracle. She’s a miracle.”

One of the largest centers for pediatric brain cancer in the U.S.

No parent wants to hear the words “brain cancer”—but with the Children’s team by their side, patients and families can rest assured that they are receiving the full spectrum of advanced therapies available to treat these complex diseases. 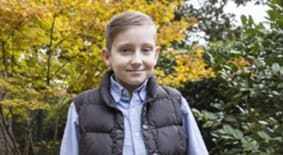 John Is Thriving With Spina Bifida