Protecting Little Lungs: What Parents Need to Know about RSV

As a new parent, you know to keep an eye on things like diaper rash, reflux and colic from day one. But there’s a lesser-discussed topic many new parents don’t learn about until they’re thrust into its scary throes: respiratory syncytial virus, or RSV.

With my first child, I was blissfully unaware of the dangers of RSV. We never heard a single thing about the virus until our second child was born. My son, Jonathan, was just 3 weeks old before we were in the hospital with a struggling newborn and learning just how scary and severe RSV can be.

It is because of that experience that I never miss an opportunity, whether it’s at a baby shower or a school staff meeting, to make sure other parents are better informed than I was. 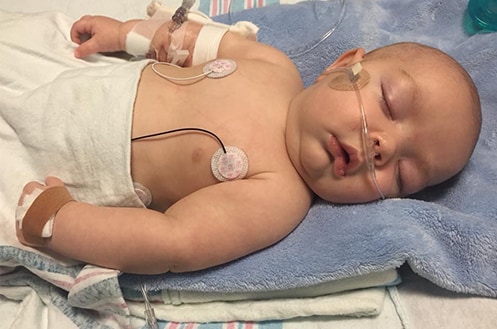 "My son, Jonathan, was just 3 weeks old before we were in the hospital with a struggling newborn and learning just how scary and severe RSV can be."

All babies are at risk for RSV. During the first year of life, it’s one of the leading causes of hospitalization for babies in the U.S. It usually begins as a cold, and can then progress to wheezing, fast breathing, coughing and fever. For infants with tiny, immature lungs, it claims about 200 lives a year. Most adults experience RSV with symptoms similar to a mild cold, although like children, they may also have more severe symptoms.

At 3 weeks old Jonathan went for his newborn checkup where his doctor immediately noticed that he was purple around his lips and gums, his chest was caving in and he was having trouble breathing. Even as a second-time mom, I didn’t know to look for RSV though it was staring us in the face.

Jonathan was rushed to the hospital where he spent four days with his lungs working overtime and his care team trying to keep his airways clear and his oxygen levels up. It was there that we learned that RSV was plaguing our newborn.

Our youngest son, Hudson, was born five years later. When he woke up on Christmas morning struggling to breathe, we knew just what to do. We took him straight to the ER where they tested him for RSV.

Hudson’s RSV test came back positive, but because his oxygen levels at that time were normal they sent us home. Nearly 48 hours later Hudson was completely refusing to eat because he couldn’t breathe.

This time, we rushed him to Children’s Healthcare of Atlanta where they gave him fluids, suctioned out his airways and gave him oxygen. Because we didn’t hesitate in bringing him to the hospital, he turned around within 12 hours, and we were able to take him home before New Year’s Eve.

I wish I had been more informed about RSV when I became a mom. I wish I had known what to look for and what preventative measures I should be taking to help protect my babies’ little lungs. Luckily, both of our RSV stories have happy endings.

Not every family is so fortunate. Once contracted, there is no treatment for RSV. That’s why prevention is so important.

I encourage you to read these tips, remember my story and share this with the new parents in your life.

How to Avoid RSV