With four young kids who would live outdoors if we let them, the house we found in the suburbs of Atlanta seemed almost too good to be true. Nestled in the middle of a neighborhood, the home's backyard provides plenty of space to run around, lots of wooded areas to explore and a beautiful creek that is perfect for wading and swimming.

My husband, an Eagle Scout who grew up in the foothills of the North Georgia Mountains, has been diligent to educate our kids about the great outdoors. He explained there are a number of dangerous snakes common to our area, and that our backyard is exactly the type of habitat in which they like to live. The one time they mistook a small harmless snake for a nightcrawler and brought it inside, we had a family meeting about proper snake protocol. In short, we did everything we could. And our kids are young—only 2, 3, 5, and 6 years old at the time—and they were never outside alone. I figured our presence and occasional lectures on backyard safety were enough. On Aug. 3, 2014, I was proved wrong. That was the day a copperhead snake bit our 2-year-old son, Levi. 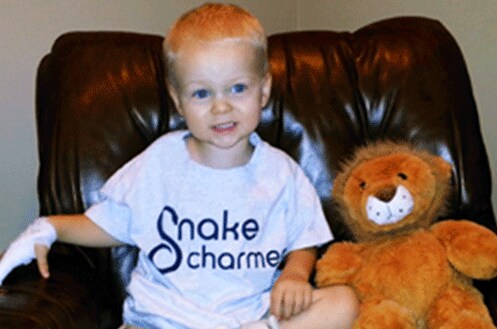 "That was the day a copperhead snake bit our 2-year-old son, Levi."

Levi was walking through our front yard when he was struck twice on the hand. I ran to scoop him up when I heard the scream and saw him falling backward. The snake was coiled up in pine straw, just five feet from our front door, when it struck. My husband quickly identified the venomous snake and called 911. I held Levi's hand tightly to his side, trying to keep him from moving it. He was screaming, and it was obvious he was in a tremendous amount of pain. My 5-year-old was asking me a question. I could see in his eyes just how scared he was. “Mommy, is Levi going to die?" I remember it as the most terrifying moment of my life. We had talked countless times about what to do if someone is bitten by a snake. We know to keep the victim still. We know to try to identify the snake to see if it's venomous. And we've always said that if it is a copperhead (a venomous snake native to our area), we will call 911 immediately. It is because we had this plan that we were able to jump into action the way we did. We knew not to waste any time. With a copperhead strike, there isn't much time for a 2-year-old. Less than two minutes had passed. The 911 operator told us to keep Levi's hand below the level of his heart. His hand and wrist were already swollen and bruised beyond recognition. A minute later, Levi and I were being ushered into the back of an ambulance. Twenty one minutes after the 911 call, Levi was in a trauma room at Children's Healthcare of Atlanta. The doctor raised his sleeve and marked the level of swelling above his elbow, indicating how far the venom had traveled.

Later, a doctor would explain the venom had traveled halfway to his heart and commend my husband for calling the ambulance when he did. Moments wasted could have meant cardiac arrest, amputation or worse for my youngest son. An order was put in to prep the antivenom. Levi was hooked to an IV and given morphine for the pain. For the first time in almost a half an hour, he stopped screaming. My husband arrived. The doctor asked how big the snake was and seemed relieved to hear that it was an adult, between 2.5 and 3 feet long. Adult snakes, it turns out, control the release of their venom, while juvenile snakes will release all their venom in a single bite. A smaller snake would have been much more dangerous.

We spent four days in the Pediatric Intensive Care Unit at Scottish Rite where Levi was treated with 24 vials of antivenom. In the months afterward, we logged countless hours visiting with a hand surgeon, physical therapist, wound care specialist and hematologist. Copperhead venom thins the blood of its victims, and it would be nearly three months before Levi’s blood clotting factors were back in the safe range.

Today, all Levi has is an ugly fang scar on his index finger to show for the whole ordeal, and a reasonable fear of small animals with sharp teeth. His physical therapist says his healing and mobility look great. In the months after our son was bitten, we cleared the yard of debris and decaying plant life (tree stumps, ivy, etc.) that make ideal snake habitats. We adopted a cat, as outdoor cats are pretty effective at taking care of the small rodents that snakes like to feed on. The kids are thrilled with their new kitten and named him Copper.

We have a firm closed-toe-shoe policy for playing in the yard. The nurses at Children’s explained to us that of the snake bites they had seen, a majority were teenagers hiking in flip flops or sandals along popular trails in and around the Atlanta area. We are grateful that we were able to identify the snake and that we didn’t hesitate to call 911. Not every hospital keeps the antivenom Levi needed on hand. Our paramedic knew to take us to Children’s, where Levi could get the medicine he needed. There is plenty of folklore about snakebites and how to treat them, but there is little truth to most of it. Left untreated, a bite from a venomous snake can lead to limited use or loss of digits or limbs for victims of any age, and even death in small children.

Odds are that our family's fate will not become reality for your family. That said, because our just-in-case plan greatly helped us through the most critical moments, here's a checklist to keep in mind:

We are thankful we were able to act quickly and get Levi the treatment needed to save his life. We share our story with the hope that it will inspire others to be watchful, educate their own kids and make a plan for the moment you hope will never happen. Visit the Summer Safety Hub for more tips from the pediatric experts at Children's Healthcare of Atlanta.